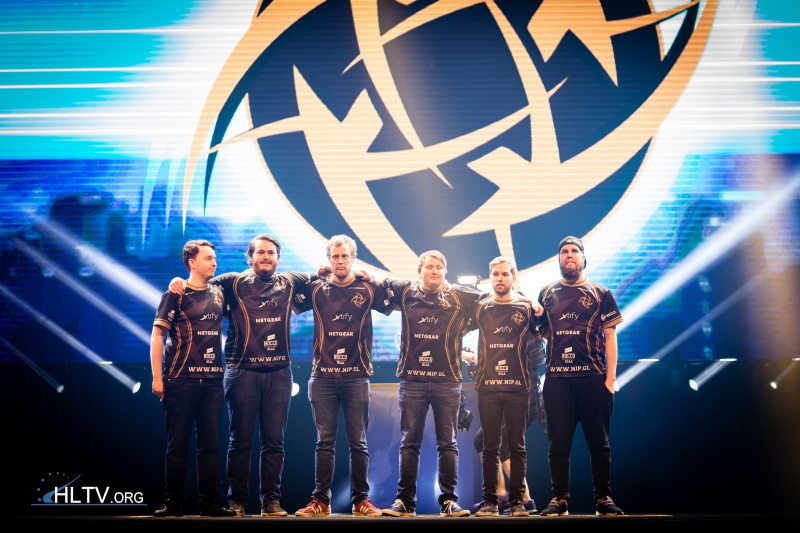 As April’s only $250,000 event, DreamHack Masters Malmö has spent the last week delivering plenty of matches, upsets, and rivalries to mull over for the month’s to come. The final day has now come and gone and NiP stand as champions after a grueling grand final. After Natus Vincere advanced to the grand final over an underwhelming EnVyUs side and NiP meanwhile ground out a 2-1 victory over GODSENT, the grand final saw the two teams first face off on Dust2. Ioann “Edward” Sukhariev kept alive memories of himself as 1.6’s pistol-god with a USP quad kill on Na`Vi’s CT-side pistolround. The first gunround however gave indications that the Eastern European team were not as clearly marked favourites as had been assumed as NiP picked up the round and the next few T-side rounds as well, powering ahead to a 4-3 score. Na`Vi began their counterattack and started putting successive rounds on the board, which included an AWP quad kill by the recently injured Ladislav “GuardiaN” Kovács to put the Russian-Ukrainian-Slovak team ahead at 8-4.

The next round saw NiP dedicate themselves to a mix-buy, a gamble which paid off as Adam “friberg” Friberg and Richard “Xizt” Landström picked up Tec9 and Deagle kills to secure the round. Ultimately, the half finished 9-6 in Na`Vi’s favour. Na`Vi surged ahead with a second pistolround win (and thus won both pistols on the map) but a series of P250 kills by NiP on the next round suddenly gave NiP an unexpected round win and the momentum necessary to trump Na`Vi. NiP began to pull away in rounds, with Landström picking up a triple kill on the 20th round and Christopher “GeT_RiGhT” Alesund getting a quad kill the next round as the Swedish team demonstrated indomitable defensive set-ups. With the score at 15-12 for NiP, Sergey “starix” Ischuk tried to bring his team back into the game with a series of T-side wins, but a solid hold by the Ninjas gave them the 30th round on the map and a win on Dust2: 16-14. Cobblestone saw a very confident NiP offensive explode onto the B-site and a T-side pistolround went the way of the Swedes. Following successful anti-ecos, Na`Vi picked up the first gunround but a series of AK47 entries by Alesund on the fifth round put the Swedish team back in the driver’s seat with a 4-1 score. The Swedish team moved all the way up to a 7-3 score on their T-side before Na`Vi awoke from the Eternal Dungeon of Tilt and, with Denis “seized” Kostin leading in a series of multifrags and clutches, it was Na`Vi who finished the half up at 8-7. Na`Vi took their T-side pistol afterwards and made it look as if the map were effectively over as they ultimately rocketed ahead to a 13-7 score but NiP seemed determined to make the game a nailbiter and began their own comeback on their CT-side. With the score at 13-12 for Na`Vi, Alesund was placed in a one-versus-two situation and the virtuoso of clutching almost managed to make the round work in his favour but Kovács pulled off a quick AWP kill to win the round and keep the team ahead. The next round became a hard reset for Danylo “Zeus” Teslenko & co. as solid defense on the A-site from Friberg put NiP back in command and, following a full eco, the score stood at 14-14. A B-site hold gave NiP the tournament point which meant Na`Vi had to rely on a mix-buy on the final round of the map but it was to no avail and the Swedish team took the map 16-14 and won the event in front of a homecrowd.