TL;DR: The teams who advance to the Knockout Stage of the 2016 Mid-Season Invitational will earn one of top four seeds for their region at the 2016 World Championship.

From May 4-8 and May 13-15, six regional champions will take to the Rift in epic battle at the 2016 Mid-Season Invitational (MSI) in Shanghai. As we previously announced in February, this year’s MSI will feature an extended schedule and an updated format allowing for even more cross-regional clashes. Today, however, we want to discuss some additional changes that should raise the stakes of MSI 2016 for regions, teams, and fans.

Why make this change? Two major reasons – this creates a better way to seed regional teams into the group draw process at Worlds, and should make MSI an even higher stakes event for fans and teams.

In previous years, seeding has been subjective; we tried to place teams based on historical precedent, but that wasn’t responsive enough to their current strength. By using the most recent international tournament (MSI) to influence the group seeding, this process should be a lot more meritocratic and transparent. This will hopefully lead to more accurate seeding at Worlds and ultimately means a more compelling tournament that’s fun to watch.

Additionally, regional seeding implications raise the stakes for teams as representatives of their regions.  Teams will not only be fighting for their own success, but the competitive standing of their region and the pride of their fans. No team will want to let down the fans of their region, which should mean even more meaningful and impactful games.

To help you understand how this impacts Worlds, it’s important to explain how the tournament will work.

The Worlds 2016 tournament format remains the same as last year with two stages: the Group Stage followed by a Knockout Stage.

In the Group Stage, 16 teams are sorted into four groups comprised of four teams each. They play in double Round Robin-style, Best of 1 (Bo1) matchups, meaning each team plays every other team in its group twice. Eight teams advance to the the Knockout Stage and matchups will transition to Bo5 format.

The number of participating teams and regional seeds per region at Worlds 2016 remains unchanged from last year: 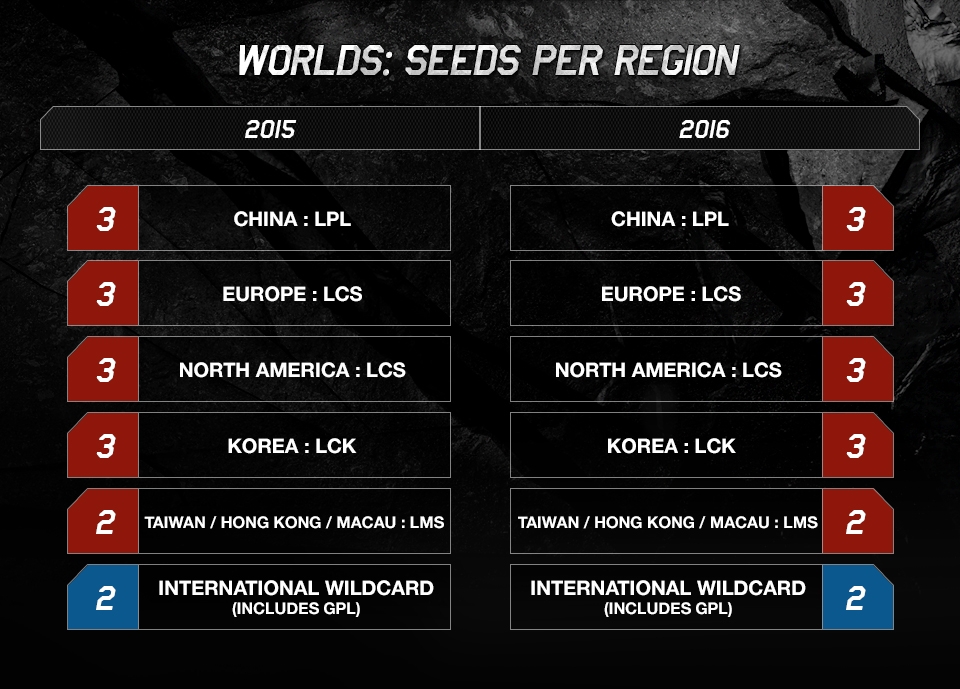 These 16 teams are allocated to three Group Draw Pools, with regional champions placed in Pool 1. Groups are then randomly drawn based on the teams in each pool;  see the 2015 Group Draw Pool Structure graphic below for reference. 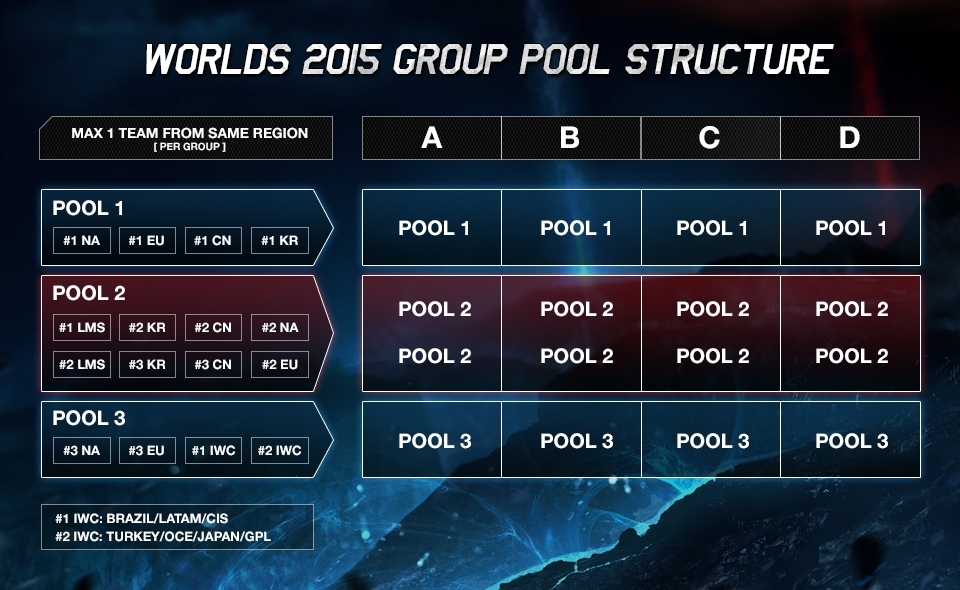 As a reminder, each group may only have one team from any given region. For more technical information on how the Group Draw works, reference our 2015 Group Draw Manual.

So how will MSI results impact Worlds?

For Worlds 2015, the first place teams from China (LPL), Korea (LCK), North America (NA LCS), and Europe (EU LCS) automatically were granted a berth in Pool 1, meaning they could not be matched up against each other in group play. This year, however, the top four teams at MSI 2016 will secure a berth in Pool 1 for their regions. Needless to say, this is a substantial advantage going into the group draw, as Pool 1 seeds are guaranteed to avoid group play with other Pool 1 seeds, who are the strongest teams from their respective regions.

This is how implications will work:

The top four teams at MSI secure the four spots in group draw Pool 1 for their regions.

Similarly, if the LMS team finishes in the top four at MSI, #1 LMS moves to Pool 1, and the other regions will adjust as with IWC.

If IWC finishes 5th place at MSI,  #1 IWC moves to group draw Pool 2, while #2 IWC stays in Pool 3. This has the following effect on whichever region finishes 6th:

As a reminder: Teams do not qualify for Worlds from MSI – it is simply the case that a team’s performance will affect its region’s standing in the Group Draw Pool Structure.

As we mentioned above, one of our goals is to have seeding at Worlds be more representative of regional strength. This helps to do that in two ways: it rewards the top four regions appropriately (giving LMS and IWC the chance to earn a spot that they’ve historically not been granted), and provides a bit of flexibility within Pools 2 and 3 to give IWC more than the all-or-nothing shot at a Pool 1 berth. IWC teams have been gaining ground each year, and we think it’s only fair to them to give them the chance to earn a better seed if they’re ready. The LMS region has clearly shown an ability to compete at the highest level both historically (2012 World Champions) and recently (100% advancement out of Groups at Worlds 2015), and is a strong challenger for a top four seed.

Below is an hypothetical example based on the performance of teams at MSI 2015 and how it could have impacted Worlds 2015. 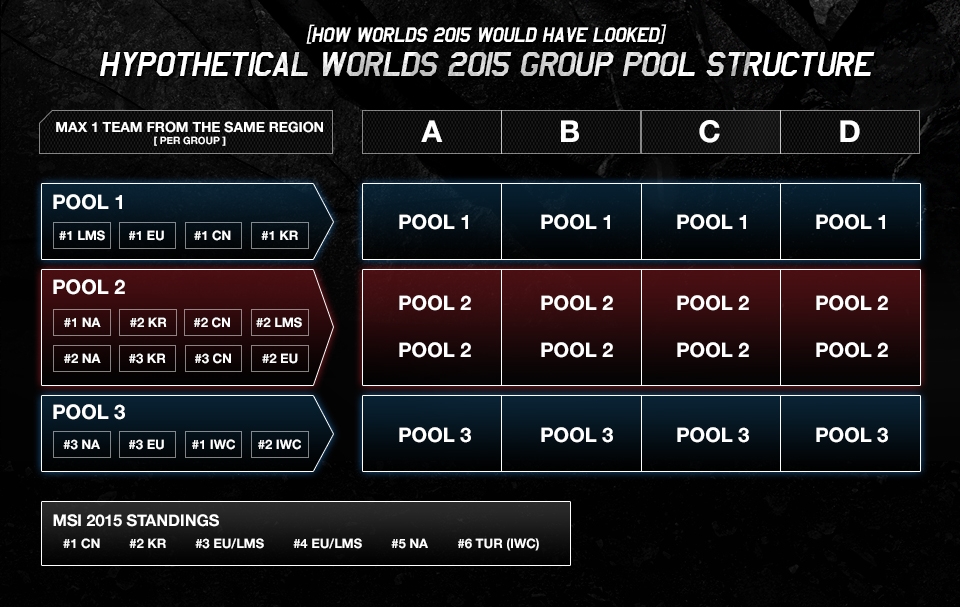 If this system of Worlds implications at MSI had been in effect last year, LMS region would have been earned a seed in Pool 1 and North America’s #1 seed would have been demoted to Pool 2.

How will the IWC regions qualify for Worlds 2016 ?

The International Wildcard (IWC) regions will qualify for Worlds from one tournament, the International Wildcard Qualifier (IWCQ), rather than two separate tournaments as was the case in 2015. This will allow for the clear ranking of a #1 and #2 seed from IWC, which becomes important if an IWC team finishes 5th at MSI, but also gives fans a more clear understanding of the strength of these teams.

In the below example, an IWC team such as Brazil (BR) finishes in 5th place at MSI, above North America. Based on this performance, the #1 IWC seed would be in Pool 2 along with the #1 NA seed, although BR would not automatically earn that #1 IWC seed. Additionally, based on their 6th place finish, the #2 NA seed would move down to Pool 3 along #2 IWC. 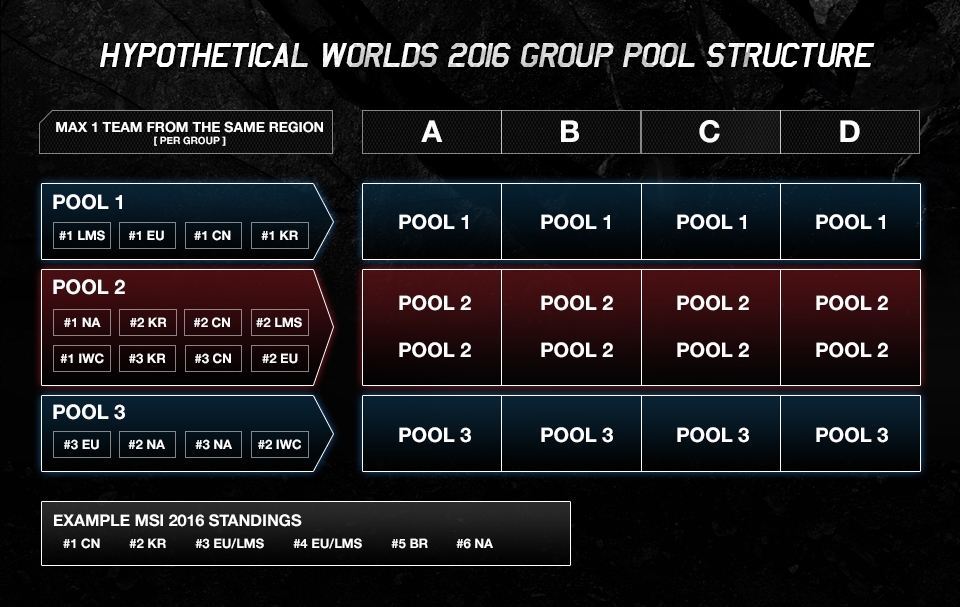 What if the IWC region finishes in the top four at MSI 2016? 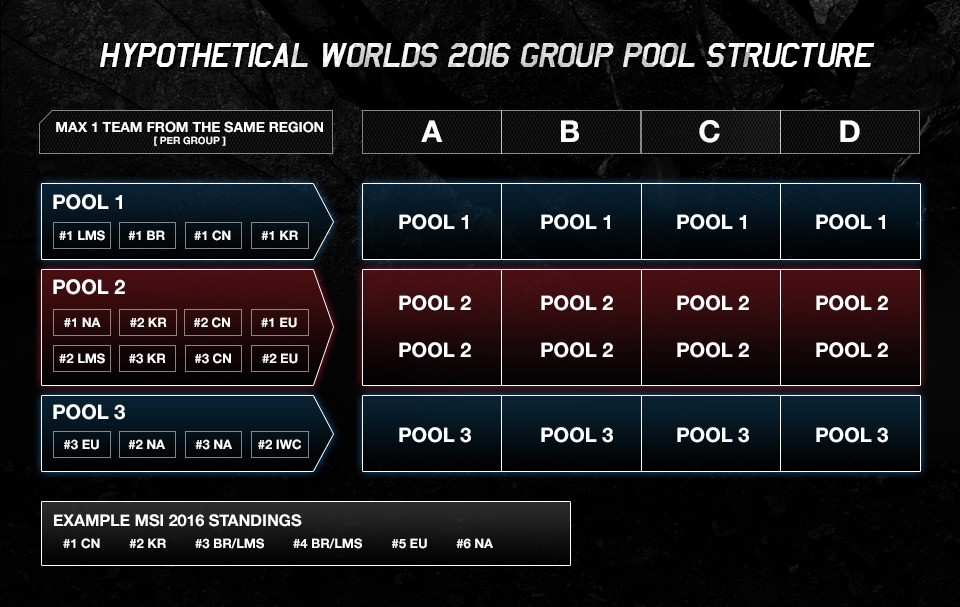 If an IWC team finishes in the top four at MSI 2016, that team secures one of the two IWC spots for their region, as well as a berth in Pool 1. In the above example, Brazil would secure the #1 seed, meaning that the winner of the Summer Split Playoff in Brazil would qualify directly to Worlds as a Pool 1 team. The #2 BR seed would still be eligible to participate in the IWCQ to fight for the remaining #2 IWC seed. If #2 BR won the IWCQ then, Brazil would have both IWC spots at Worlds 2016.

For more information on these detailed changes, read the 2016 Mid-Season Invitational Official Rules.

Stay tuned to Lolesports to get more updates as regions crown their Spring Split champions and we draw even closer to the 2016 Mid-Season Invitational.