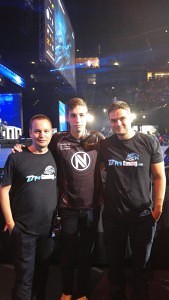 ESL One invites you to the Lanxess Arena in Cologne, Germany on August 22-23 2015! This was the world’s largest Counter-Strike: Global Offensive tournament. 16 of the best teams in the world have played for a $250,000 prize pool in front of thousands of fans.
Over 27 million unique viewers watched the event over the two days. Almost 340 million hours watching the action at Twitch, but only in the game to Valve for the final peak was 1.3 million people. If only this tournament viewership growth of 30%, is expected to gaming is gaining more and more popularity.
ESL One Cologne follow the ESL One Frankfurt that has turned into something like a festival where everyone can have contact with their favorite teams and professionals and “premium” fans can take autograph.
Meanwhile, for the first time it was presented a new model of marketing, which is the connection between online and offline commerce, namely Series 01 CS: GO Valve Pins.
But the best gaming equipment, chairs and peripherals friendly health in the future more and more control will have over all the auxiliary substances and drugs. So gaming can be a form of selection among young people of the future – ESL announced a partnership with WADA and NADA to create and implement a policy to combat doping, Nada has prepared a prevention program that is presented to players and visitors during event.
“ESL conduct random testing of anti-doping among participants in the race, which gave negative results for all tested players.”
The main goal of BPro Gaming is to give equal opportunity to all good players in the different genres of games to develop themselves and the best to become part of the atmosphere at tournaments like ESL and other …