The iBUYPOWER 2016 Spring Invitational marked the computer hardware company’s return to an online tournament format, in a similar style to its Fall, Summer, and Spring Invitationals of last year, with ten teams dueling for $15,000 over two days this time around.

Easily the the biggest upset stories from the first day’s bracket were the Brazilian teams Luminosity and Tempo Storm, who are currently ranked #4 and #12 in the world, fall by the wayside against Selfless and CLG respectively in their quarter-final matches.

By the second day, the semifinals saw Cloud9 and Liquid advance to the best-of-three grand final.

The first map of de_dust2 first appeared as if it would be a complete blowout as Kenneth “koosta” Suen and teammates of Liquid ran over Cloud9’s defenses to finish up with a 12-3 half. However, dynamic T-side executes from Jordan “n0thing” Gilbert and his team somehow brought Cloud9 forwards into an overtime situation.

In overtime however, Aleksandr “s1mple” Kostyliev helped his team buckle down and take the first map 19-17.

With Liquid’s apparent inability to close the second half perhaps being an indication of them being the weaker outfit, Cloud9 showcased strong T and CT sides on de_train to clinch the map 16-7.

de_cache was also a downwards spiral for Liquid with Jake “Stewie2K” Yip, Ryan “freakazoid” Abadir, and Gilbert all playing at their peaks and in the end Cloud9 closed out the map 16-5 (which included a game closing highlight moment courtesy of Mike “shroud” Grzesiek) and won the iBUYPOWER Spring Invitational 2016. 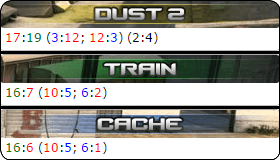