Earlier today we play the last match of Group C against Norse. Unfortunately the Norwegians defeated us with 2:0 Dust2 (16 – 4) and Mirage (16 – 7) in the best of three decider match and securing the final playoff spot in the group. After the defeat our team dropped out of the tournament. 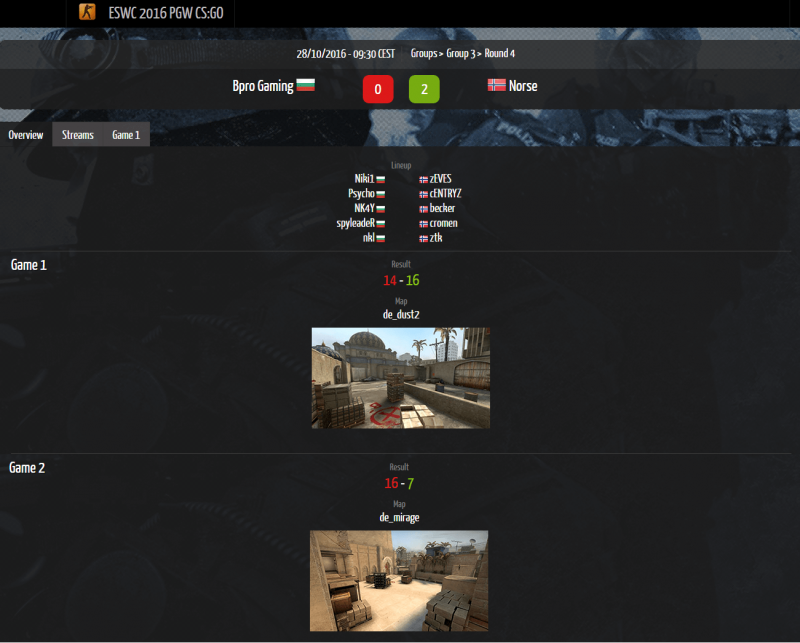 The final ranking in the group  C is:

With the second day of play over in Paris, it’s time to take a look at how the group stages have fared for the competing teams, and what is to come during the playoffs at the $75,000 event.

With the group stages over, it’s time to look at how the 32 teams fared ahead of the playoffs which will be starting tomorrow. The

All group A matches were played out the first day, check out yesterday’s recap for more information.

All of the matches except the decider match were played yesterday. The decider, however, took place today between Bravado and LDLC. The first map of the best of three, Train, went the way of the South Africans fairly easily, 16 – 10. It was then LDLC who would show the greatest staying power on Dust2, after losing the T side the European team was able to bring it back on CT to take it to a third map. It all came down to Cache, the map LDLC had already beat Bravado in the opening match, and just like yesterday, LDLC were able to exploit the South African side’s weaknesses, closing out it 2 – 1.

All group D matches were played out the first day, check out yesterday’s recap for more information.

The opening matches in the group pitted Kinguin against Sector One and Preparation against Wyvern. The first of the two was a completely one sided ordeal, with Kinguin only giving up two rounds. Meanwhile, it took preparation a whole 29 rounds to take on Benjamin “BENDJI” Söderena, Miran “Dumas” Matković and co. out, with a final score of 16 – 13. The winners’ match went a grueling 46 rounds with Kinguin finally taking the Dust2 match 26 – 21 over Preparation. The loser’s match, meanwhile, ended up with an upset as the Franco-Belgian Sector One lineup eliminated the Bosnian-Swedish-Hungarian team Wyvern in three maps.

It was finally Preparation who made it through over Sector One in the decider, with the Russian side taking it in two maps, Dust2 and Nuke.

The Swedish wonderchildren of Epsilon took this group in the blink of an eye, beating PRIDE (16 – 11 on Cobblestone) in the opener and smashing PENTA—who had come from beating ArchAngels—by 16 – 4 in the winners’ match on Cache. draken & co. are a strong contender to lift the trophy

Meanwhile, PRIDE quickly dispatched the lesser of the two Swedish teams in the group, eliminating ArchAngels to face PENTA in the decider. The decider went all the way to three maps, but it was finally PRIDE sliding through as the second Polish team to make it out of groups in Paris.

The only match of the last four groups to have been played yesterday was fnatic Academy vs. Rogue, which saw the young Swedes take the match on the stage at the Paris Expo Porte de Versailles. This morning, it would be paiN to put fnatic’s academy team’s feet back on the earth. Meanwhile, ENCE—who lost their opener to the Brazilian-Portuguese combine—broke the Danish-Bulgarian alliance winning two maps in a row and thus knocking Rogue out of contention.

Another upset happened, this time with fnatic Academy knocking ENCE out in two maps, furthering the depth of talent Sweden is putting out in the underbelly of competitive CS.

The mix of experienced and inexperienced players that is Millenium proved to not work so well yet, as the francophone potpourri’s lineup featuring France, Belgium, Switzerland and Turkey lost to both k1ck oldschool and Luminosity. That wasn’t the biggest surprise, however, as the biggest underdog in the group, Platinium sneaked their way past Luminosity and k1ck oldschool to run away with the #1 seed. It was then down to k1ck oldschool and Luminosity—who had to play without Gustavo “yeL” Knittel who was out sick, and played with David “Xp3” Garrido in his stead—, but the match Brazilians didn’t have much to do, as Ricardo “fox” Pacheco and the boys won Cobblestone 16 – 10 and Dust 16 – 11 to assure their presence in the playoffs.

Last but not least, here is a list with tomorrow’s match-ups:

Information: BProGaming.com and HLTV.org , picture from the ESWC 2016 can be found here.