The first day of action in Paris has come to a close as the first four groups have played out their matches at the Paris Games Week The remaining groups will be played out tomorrow ahead of the playoffs this weekend, which will see one of the 32 teams present take home the lion’s share of the $75,000 prize pool.

The action in our group (Group C) started with Gambit and BPro taking on GODSENT Academy and Norse. The Kazakh-Russian-Ukrainian side took out the Swedes on Overpass, while it took BPro 22 rounds to finally prevail over the Norwegian side, also on Overpass. 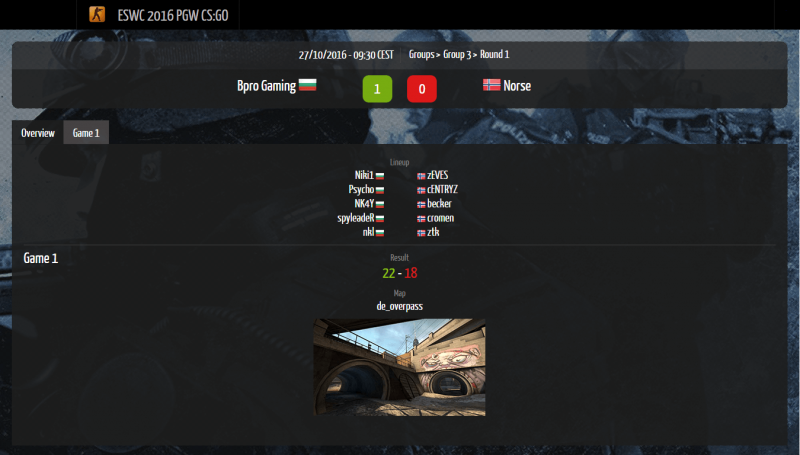 Gambit played their cards right in the first day of play

Norse then went on to secure a spot in the decider match as they eliminated the young Swedes in dominant fashion by only giving up eight rounds in two maps (Train and Nuke). BPro would be the other team in the decider match, as a comeback by Gambit on Dust2 would give the Kazakh team a berth into the playoffs. Which means that GODSENT Academy are eliminated with 2 losses in a row. 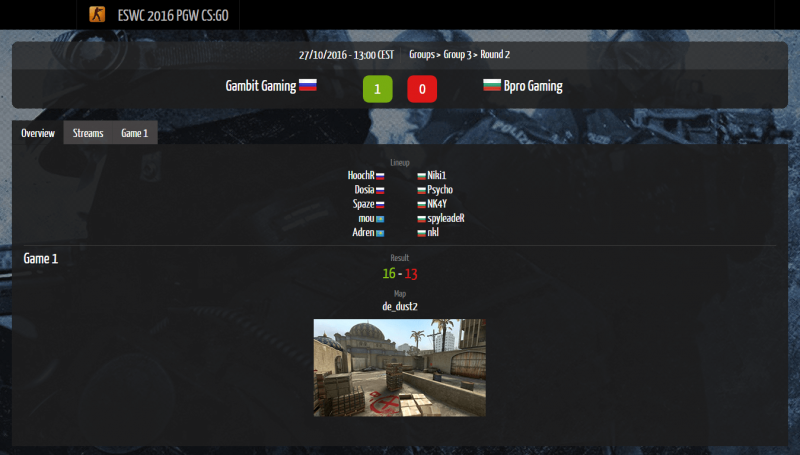 Tomorrow we will face Norse again at 9:30 CET. The winner will come out of the groups for ESWC.

Results from the others groups are:

GEX were the first team to go out. The Iranian side had absolutely no chance with two crushing defeats against Space Soldiers (16-1) in the opener and against iGame.com (2-0) in the elimination match.

The opener featuring iGame.com and Red Instinct went the way of the locals, with the French team edging out the Finns by a 16-10 margin on Dust2. The winner’s match was then won by Space Soldiers, sending Red Instinct into a rematch with iGame.com.

It seemed as though Red Instinct could show a good fight in the decider match, but iGame.com took the two maps without letting Red Instinct score more than 10 rounds on either of the two, Dust2 and Cache.

Group B, with two tournament contenders in the form of LDLC and Heroic is one of the most interesting in the tournament. After swift wins against Bravado and Overcome, respectively, the two contenders duked it out on Nuke, where the Danes came out on top by a large margin (16-7) and therefore clinching a spot in the playoffs. Ex6TenZ’s LDLC will have to beat Bravado again for a spot in the playoffs

The elimination match saw the South Africans of Bravado defeat Overcome from India. Bravado gave up 20 rounds in two maps with Dimitri “Detrony” Hadjipaschali leading the way while young star Aran “Sonic” Groesbeek had some trouble finding his stride, which he will have to find if Bravado are to beat the favorites in tomorrow’s matchup, LDLC.

The first match between the two teams went to the francophones of LDLC, but Robby “bLacKpoisoN” Da Loca thinks the best of three series taking place tomorrow will benefit the South African team.

The games in Group D started out with favorites ALTERNATE aTTaX taking on FTW on Dust2, which the Germans won 16-12, and the second Danish team at ESWC, Tricked beating FIVE by the slimmest of margins on Overpass, 16-14.

The elimination match in Group D was the only one to go all the way, as FIVE and FTW won Cache and Mirage respectively. ALTERNATE aTTaX won the winners’ match 16-14 on Overpass, sending Tricked to the decider against FIVE who managed to beat FTW 2-1 in the elimination match.
JUGi will be a player to watch the rest of the event

Finally, it was Tricked who joined ALTERNATE aTTaX with a playoff spot, as the Danish team were able to take out FIVE without much of a fuss in two maps, showing much more superiority than in the opener.

Tomorrow the Group B and C deciders will be played, along with play from the rest of groups that haven’t kicked the tournament off yet (with the exception of one opener in Group G, as fnatic Academy beat Rogue 16-11 on the Porte de Versailles stage).